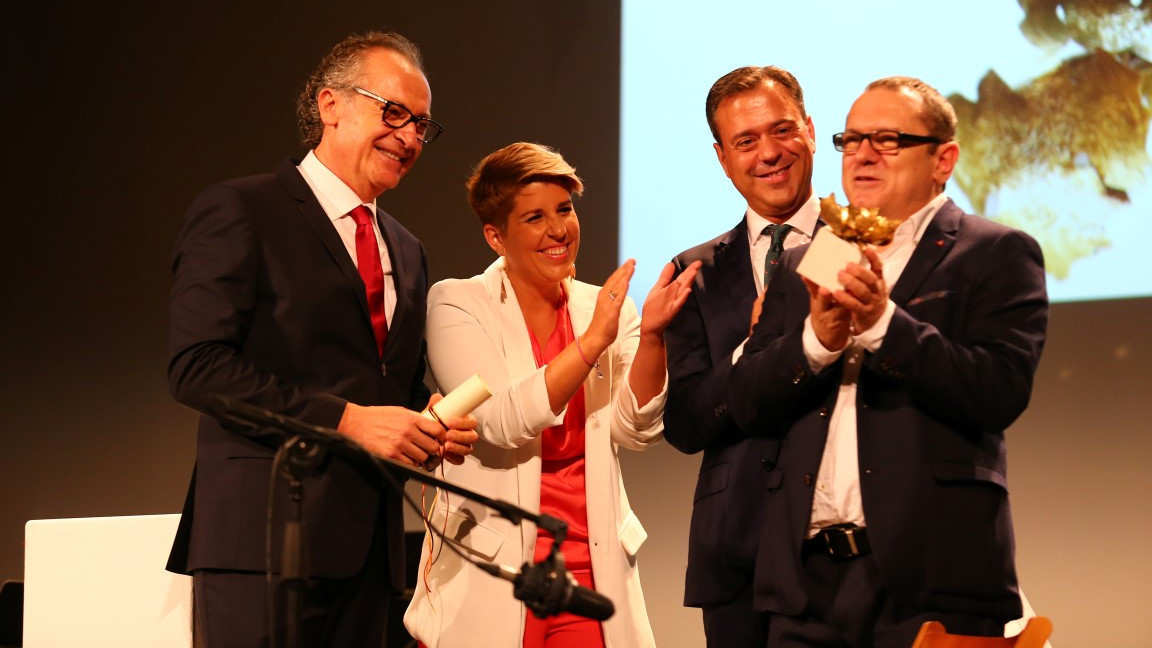 The multitudinous appointment has been celebrated during the days 8 and 9 of September of 2017 in the Murcian locality. After the development of the different proposals, the president of the Route of the Wine of Yecla, Juan Pedro Castaño, has valued very positively this new edition: " The response of the public ratifies us that the effort is worthwhile".

The Wine Route of Yecla offers varied plans throughout the year, but the second weekend of September celebrates the traditional Wine Fair. Organized by the Hon. City Council of Yecla, CRDO Vinos de Yecla and Wine Route of Yecla, this is a very symbolic call, since it coincides with the harvest season. Last Friday the 8th Enotourism Nomination Gala was held at the Concha Segura Theater, presented by the journalist Noemí Martínez (RNE). There, the Yeclan playwright D. Francisco Ortuño Millán received the Enotourist of the Year Award: "Never in my life did I dream that this was going to happen to me," he said in an emotional speech. "Wine has a lot to do with the courage of a city," he reflected after showing the sculpture created for the occasion by the artist Rosa Poveda, present among the public. His words were preceded by the interventions of the spokesperson of the Government of the Region of Murcia, Noelia Arroyo; the mayor of Yecla, Marcos Ortuño; and the president of the Wine Route of Yecla, Juan Pedro Castaño, who called for the need to strengthen regional wine tourism and thanked all those who make it possible for the Yecla Wine Route to continue improving year after year. The guitarist Carlos Piñana performed the Evocation to Wine, while the Symphony Orchestra of the Region of Murcia put the finishing touch to an evening where very important data were given, such as the increase in more than 20% of the visitors to the Route of the Yecla wine only in the last year. Not in vain the wine of Yecla is becoming more international and its excellence is an added reason to the powerful cultural, gastronomic and natural attraction of the whole area.

On Saturday 9, a packed park of the Constitution hosted the first step of the grape, organized by the Association Choirs and Dances Francisco Salzillo. Next, it was the turn of the prestigious Folklore Festival of national character Ciudad de Yecla, where this year the Accademia delle Tradizioni Popolare 'Città di Tempio' of Sardinia (Italy), the 'Amigos de la Jota' Artistic Association of Teruel, took part. Choirs and Dances of Jumilla and Choirs and Dances of Yecla. During the show, neighbors and visitors had the opportunity to taste wines and tapas at the stands located in the middle of the street. Music, good atmosphere and tradition.

Yecla, an ideal heritage for the best wine tourism

The Yecla Wine Route has 5 wineries and some 40 associated establishments. Last year it added more than 4,500 visitors, 50% of them from foreign countries. The initiative includes wine tourism packages, accommodation, restaurants, bars, guided tours and an agenda full of ideas to enjoy the cultural, natural and gastronomic heritage of Yecla through the art that surrounds the world of wine. Reds, whites, rosés, crianzas, reservas, jóvenes, ecológicos ... Yecla's wine tradition is a benchmark throughout the country, it has a Denomination of Origin since 1972 and covers more than 7,200 hectares of vineyards. A constant work for quality and innovation that, again, has borne fruit during the Wine Fair 2017. The president of the Yecla Wine Route, Juan Pedro Castaño, highly valued the outcome of the event and concluded that " These efforts are to put in value this wealth that Yecla has around his grape and wine and, in the end, we are making a wine tourism product in the broadest sense ". "I invite you to know the Wine Route of Yecla", ditched.

In short, it is about continuing to optimize wine tourism in Spain.

Because Yecla, without a doubt, offers an ideal plan in a very welcoming environment.