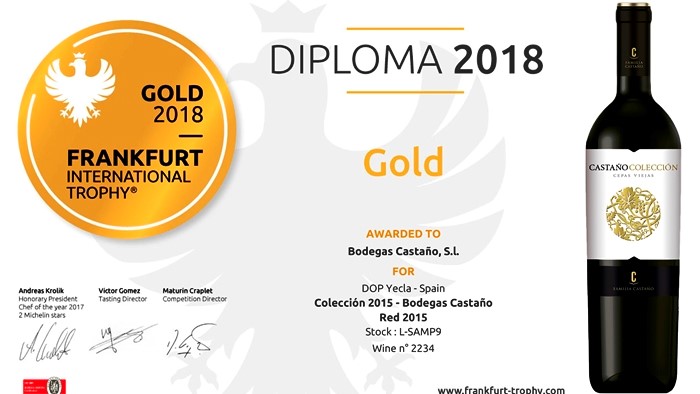 A jury of 300 international tasters, including 80 fans, gathered in April in Frankfurt to taste 2,250 products from 38 countries. Among the winners, Bodegas Castaño (DO Yecla) received two gold and one silver medals in the wine section: Frankfurt International Wine Trophy 2018. One of the golds has fallen to the prestigious Castaño Collection 2015, made with old vines.

On the 7th of April, the Frankfurt International Trophy was celebrated, a contest that awards the best wines, beers and spirits in the world each year. An international jury (in which a small percentage of amateur judges participate) were in charge of awarding the prizes in the famous Gesellschaftshaus Palmengarten, historical building from 1870, located in the center of Frankfurt. In the wine section (Frankfurt International Wine Trophy), 1,600 wines from more than 100 vine-growing properties from around the world were evaluated. Bodegas Castaño received two gold and one silver medals for three wines made by the yeclana winery.

One gold and one silver were for two varieties that are only marketed in the German market, the third gold was for the prestigious Castaño Collection of 2015, made with old vines. It is a coupage of the varieties Monastrell and Cabernet Sauvignon that results in a smooth mouth, with slightly marked but elegant tannins and a finish with a lot of persistence.

For Daniel Castaño, Export Manager of Bodegas Castaño, "this award is a recognition of the great work we have been doing for more than forty years". The award has been received in an anniversary year, when the winery prepares to celebrate its centenary. "We are growing a lot internationally, the Castaño brand is synonymous with quality Monastrell wines and our Castaño Collection is a great example," explains Daniel. The contest counts every year with an honorary president, who is usually a great German chef with a Michelin star. This year the Frankfurt International Trophy has had Andreas Krolik as honorary president (chef of the restaurant Lafleur, in Frankfurt, with two Michelin stars), and as godfather, Peter Feldmann, mayor of Frankfurt