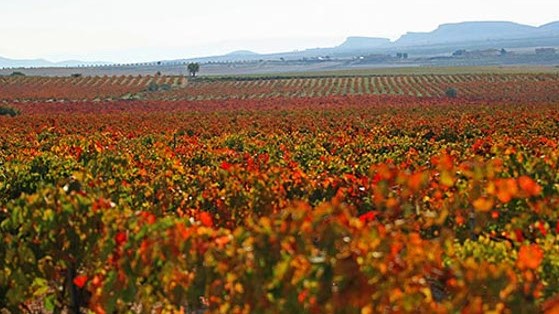 The Denomination of Origin of Yecla (Murcia) dates back to 1972 and raises the 'Monastrell' grape as an icon of its crops. Excellence, intensity and aroma are some virtues of its genuine wines, an increasingly international product thanks to the teamwork of the Yecla Wine Route.

The Yecla Wine Route is made up of 4 wineries (Castaño, Barahonda, La Purísima and Evine) and about 40 establishments including accommodation, restaurants, oil mills and shops. Only in the last campaign the wine production reached 9 million and a half liters and, according to the annual report of visitors of 'Wine Routes of Spain', Yecla stands out for a significant increase of 27.5% over the previous year. Undoubtedly, Yeclano wine tourism is booming with its many proposals to discover the cultural, natural and gastronomic heritage of the city through wine.

Plans for all, guided tours, folklore, tastings and tastings ... The Yecla City Council, the Yecla PDO and the Yecla Wine Route organize during the month of September 2019 the Harvest Festival (weekend of 7 and 8 ) and the great Wine Tourism Gala, which will be on Sunday 29 and will recognize José Miguel López, director of the Radio 3 Discópolis (RNE) program as Winemaker of the Year.

The wines of Yecla (Murcia) have Denomination of Origin since 1972 and, today, they are consolidated as a benchmark of quality in Spain and internationally.

Reds, whites, pinks, aging, reserves, ecological, young ... With more than 7,000 hectares of vineyards, the Yecla Wine Route invites you to live the "Monastrell experience" and rediscover the city as a destination full of sensations. Wine tourism or wine tourism has become an engine to get to know Yecla's culture, nature and gastronomy better thanks to the universe surrounding wine. Pure art.

The Yecla Wine Route is made up of 4 wineries (Castaño, Barahonda, La Purísima and Evine) and about 40 establishments (accommodation, restaurants, mills and shops). Throughout the year, it offers activities and events to learn and enjoy the whole wine production process, an incomparable drink that, as Dante would say, "sow poetry in hearts."

And so, with its firm commitment to wine tourism, Yecla receives more and more visitors interested in discovering the essence of “la Monastrell” and other grape varieties that have put the town on the country's wine map. Located halfway to Murcia, Albacete and Alicante, the Yecla Wine Route remains true to its style, inviting you to taste its extensive heritage with the clinking of glasses as the original soundtrack.

As always, this course has hosted very popular events and, among other initiatives, the Wine Bus has been launched, promoted by the Tourism Institute of the Region of Murcia and which runs along the wine routes of Jumilla, Bullas and, for Of course, Yecla. Another opportunity to celebrate this world of sensations and toast for the good things in life.

And yes, the mythical winemaker Robert Parker chose a wine from Yecla among the top three on the planet for its value for money ...

Come to the Harvest Festival of Yecla and the Wine Tourism Gala September is always a frantic month. The City of Yecla, the Protected Designation of Origin (PDO) Wines of Yecla and the Yecla Wine Route organize during the month of September 2019 the Harvest Festival (weekend of 7 and 8) and the great Wine Tourism Gala, which will be Sunday 29 at 12 noon in the
Concha Segura Theater of the municipality.

In the midst of a festive atmosphere, the Wine Tourism Gala will recognize as a Winemaker of the Year 2019 José Miguel López, director of the Radio 3 Discópolis (RNE) program, which takes the witness of the 2018 Winemaker of the Year, the Yeclana journalist Noemí Martínez (RNE) ). Thus, the veteran presenter joins the prestigious list of ambassadors of the Yecla Wine Route for its dissemination of wine tourism in the region. Because José Miguel López and his Discópolis are, for several editions, a hallmark of the Yecla Jazz Festival. And, again, September gets on
These lands a perfect mix: wine and culture.

The entire program of activities, the complete agenda and many special moments will be shared on the social networks of the Yecla Wine Route.