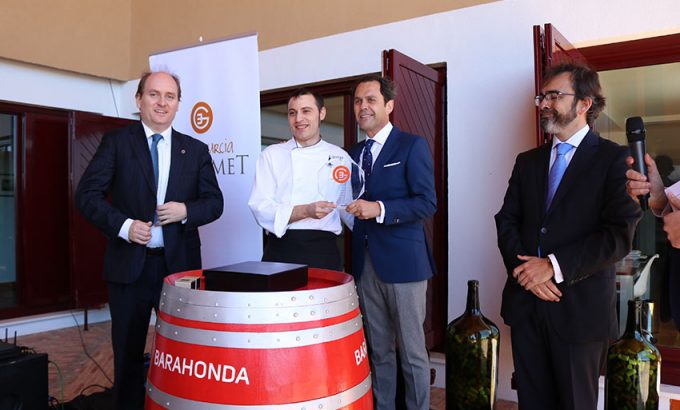 The Restaurant Barahonda de Yecla received today the X Mursiya Mezze Award from the Murcia Gourmet Club as the best hotel establishment of 2016.

The Mursiya Mezze is the award with which this gastronomic society founded in 2006 recognizes that establishment that has obtained better ratings in various sections, such as presentation, product, complexity, food pairings, etc.

The menu that Barahonda served at the October dinner received the highest scores and thus adds to the list of restaurants distinguished by Murcia Gourmet.

"Murcia Gourmet was the idea of a group of friends that has grown to become a consolidated gastronomic society that will continue to fully support the cuisine and chefs of this region," said José Ramón Carrasco, its president, who underlined the gastronomic story that the club has been building in the last decade and that is a true reflection of the evolution that gastronomy has had in the Region. This story is reflected in the chronicles and images collected, to the point that the photographic archive of this association is perhaps the most important in regional gastronomy in the last decade

The mayor of Yecla, Marcos Ortuño, was in charge of delivering the Mursiya Mezze to the head chef Cristian Palacio, and to the representative of the family that owns the winery, Antonio Candela. The restaurant, located in the building designed by the architect Vicente Martínez Gadea, is part of a family business that dates back to 1850, when Pedro Candela Soriano began to produce and sell locally small quantities of wine. From the small local farm to the modern winery that produces quality wines appreciated in international markets, four generations have passed knowledge and tradition from parents to children.

The Mayor of Yecla stressed that the award is a new recognition for a restaurant that is already a reference at a regional and even national level, and that complements the excellent work of a winery that has already received important international awards.

For his part, Antonio Candela thanked the Murcia Gourmet Club for this recognition, which is another step in the consolidation of a restaurant "that started almost as something anecdotal to accompany the tasting of our wines and thanks to our chef Cristian Palacio become a laboratory of unique flavors and textures in our Region "

Barahonda served at lunch the menu that was awarded with small variations and which was composed, among other dishes, of Marmolada de Gamba Roja of Santa Pola with Piquant Tones, Foie de Patito de Goma, Salmorejo with tuna and roe of trout, Bloody Mackerel , and Lomo Alto de Buey Angus with Ashes and Emulsion of Hazelnuts

The menu returned to delight the partners who had the opportunity to taste it at the time and the rest of the guests at the event.