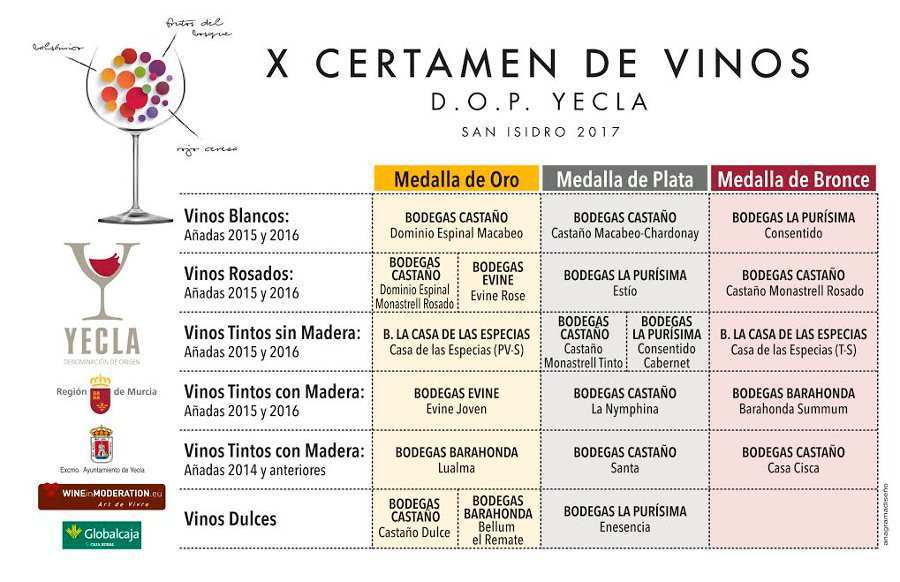 On Friday, May 19, the Dop Yecla San Isidro Wine Quality Contest 2017 was held, this being the X edition of the same, in which the Yecla Protected Designation of Origin puts the quality level of its wines to the test, to be able to select those elaborations that are more outstanding, for this the organization of the Contest always bet to incorporate prestigious professionals who contribute their wisdom and experience to the tasting panel, specialized journalists, winemakers and sommeliers.

The proclamation of winners and awards ceremony was held at a gala dinner offered on the evening of the same day 19 at the restaurant Los Chispos de Yecla, with the assistance of local and regional political representatives from the PDO of wines from nearby Almansa and practically all the wine sector of the PDO Yecla.

The wines tasted in the "X Yecla San Isidro Wine Contest 2017", have had an excellent level consolidating even more, the bases of this small Denomination of Origin to achieve its maximum national and international projection.

Fernando Riquelme Ballesteros: is a professor at the University School of Food Technology and a scientific researcher at the Higher Council for Scientific Research at the Center for Edaphology and Applied Biology of the Southeast (CEBAS-CSIC). He was a professor at the School of Agricultural Engineers of Orihuela. He has published numerous articles on Monastrell wines in different specialized magazines. He has been Jury in numerous wine competitions, and is also organizer of the National Contest of Wines Guild of the Kingdom of Monastrell, of which he is president.

Vicent Escamilla: Chief Editor of the Wine Week, jury in numerous wine competitions among which the Concours Mondial de Bruxelles stands out.

Rocío Gil Muñoz: PhD in Chemistry. Researcher of the Imida since 2005. Head of the Viticulture Department of the IMIDA since 2008. Responsible for the Quality of the Oenological Laboratory of Jumilla. Jury of the Contest of the Brotherhood of the Monastrell in the last three editions.

José Luis Murcia García: José Luis Murcia holds a PhD in Journalism from the Complutense University of Madrid, a journalist specialized in wine and gastronomy. He publishes in El Mundo, El Correo del Vino, Gourmets and La Semana Vitivinícola. Co-director of the Specialist Course in Gastronomic Information of the Complutense University. Director of Conferences and parallel activities of Enofusión and World Bulk Wine Exhibition, Amsterdam. Jury of various national and international competitions and author of several books.

Nuria Spain, Sommelier of the Restaurant with Michelín Monastrell star, taster and specialized critic and collaborator in different publications.

Antonio Chacón, school: Co-owner of Hoteliers' Advisors of the Mediterranean, the only one of its kind in the Region. Currently working as a room trainer in the Tourism Qualification Center of the Region of Murcia (CCT), Gastronomic Advisor to some mythical premises of the capital and Events Manager Antonio Chacón. He also writes for Gastrónomo Magazine in the "Secretos de Sala" space.

Pascual Hernández: taster of the tasting panel of the PDO and winner of the Concurso Enólogico la Minerva. He has participated in leading gastronomic events, such as Murcia Gastronómica and GastroTEA, among others.