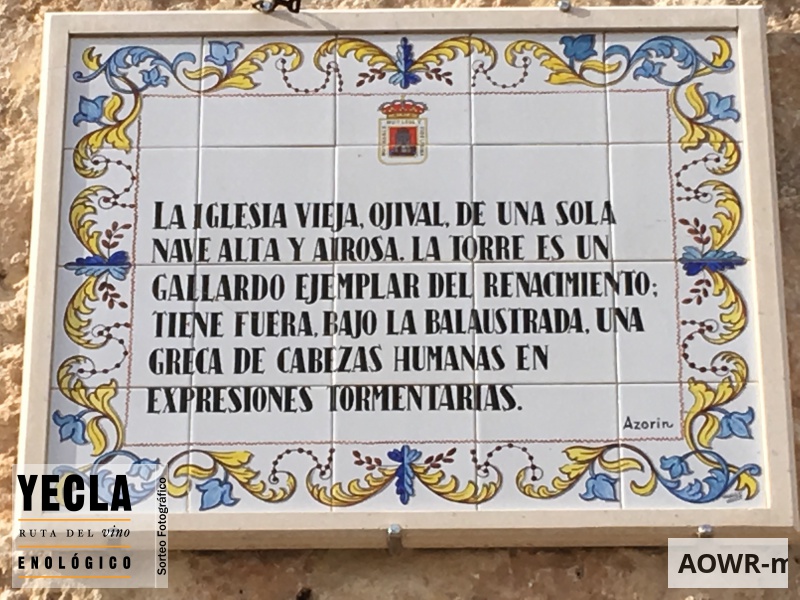 During the month of September the challenge of the contest The Will of Azorín corresponds to the mosaic located on the facade of the Old Church.

COMPETITORS OF THE MONTH OF SEPTEMBER

PARISH OF THE ASSUMPTION - OLD CHURCH

The Parish of the Assumption, popularly known as "Old Church", dates from the s. XVI, beginning its construction in 1512 and ending forty years later. Rectangular plant with dimensions of forty meters long by fourteen and a half wide. It consists of a single Gothic style nave with a ribbed vault and side chapels between the buttresses.

The Gothic layout of the nave is divided into five sections and the sixth section is Renaissance polygonal in shape, in whose upper part is the main altarpiece lost in the first half of the s. XVII. The accesses are on the sides of the apse of Escurialian influence, allowing the passage of one of them to the ante-sacristy and sacristy and the other to the bell tower. It emphasizes in the northern facade a flamboyant cover framed in archivolts and ornamented in its tympanum by its holder. In addition, neoclassicism incorporates another cover today walled up.

The damages produced during the Civil War, left its interior deteriorated, losing its sculptures and paintings. In recent years restoration work has been carried out that has definitively consolidated its structure.

The architecture of the temple follows a model similar to other temples of this time, located in surrounding cities.

Highlights the Renaissance tower, built in the middle of s. XVI, with a frieze with sculpted heads mixing harmony and slenderness. It has a rectangular base of 8.10 m on the side and 35 m in height, divided into four floors. In the last, we find mullioned windows, bells and a large frieze with a curious series of sculpted heads with different motifs on each face. On the north side there are 7 knights, representing the nobility of the s. XVI., On the west side, the figures of several clergymen, on the East the faces of two women, soldiers, etc. On the South side you can see the faces of two young people with an anguished expression, two skulls ... In the last section there is a pyramidal and octagonal dome, besides we find four heads carved on the four edges, three of them of man (representing youth, maturity, old age) and another of the lion.

In the gothic ships of the Old Church the Museum of Holy Week is located from recent dates . Collect the steps that procession in Holy Week. They are outstanding examples of Murcian and Valencian imagery.

You can also see thrones, banners, embroideries, cross-guides, tunics and costumes of great value from the seventeen brotherhoods and brotherhoods that participate in processional parades.

Parades that have earned recognition to be declared of Regional Tourist Interest.